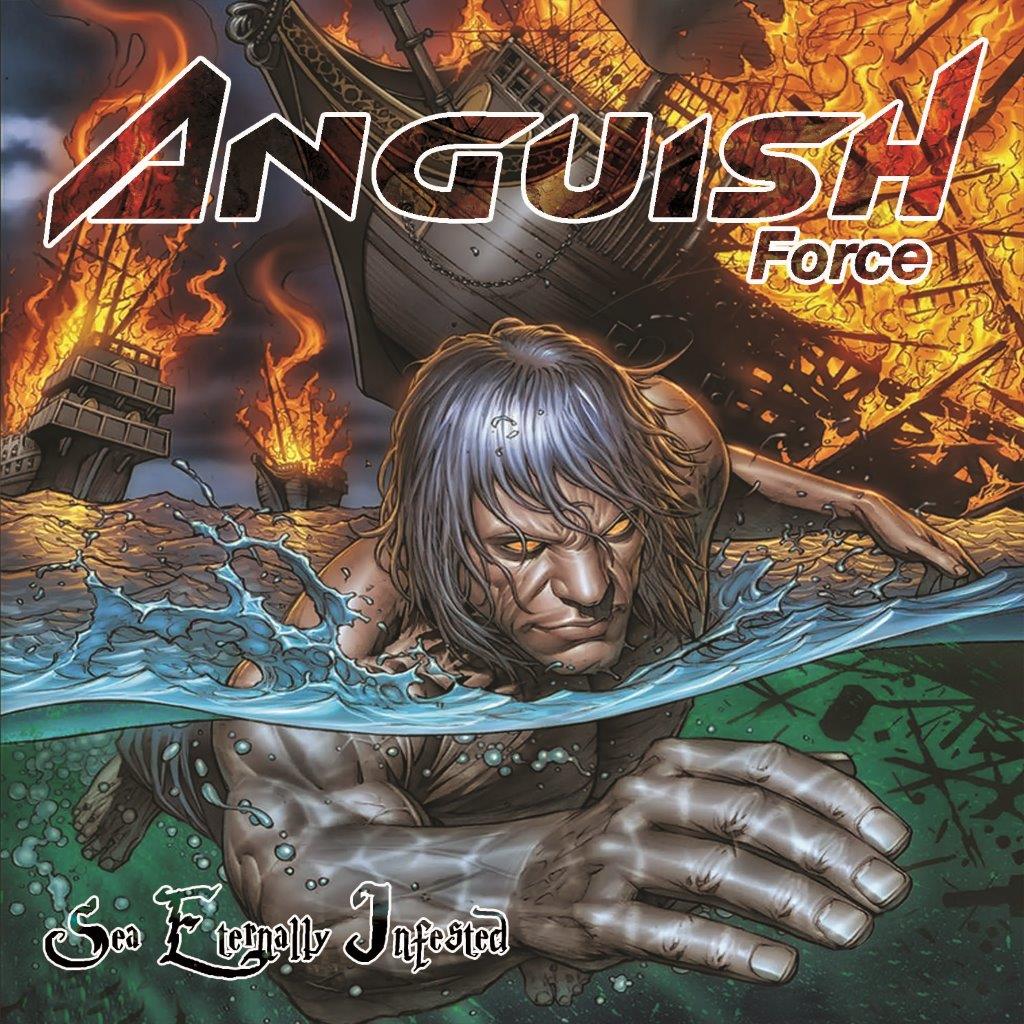 Not something that you would tell your kids right before bedtime, right? Maybe this is a collective of sea horror tales to join into a single music album? That is exactly what the veteran Italian band, ANGUISH FORCE, have been trying to pull in their brand new release, via their independent label of Defenders Records, “Sea Eternally Infested”. Putting their trust into the subgenres of Metal that won the 80’s al’a Heavy / Speed, and 90’s Euro Power Metal, ANGUISH FORCE delivered the message of the sea in a kind of a concept album, which till now it is hard to me to connect the dots between the songs. On the other hand, it didn’t really matter when thinking of it.

Throughout my listening experiences with “Sea Eternally Infested”, I tried to turn a blind eye towards the quality of the studio production at Stable Studios, which wasn’t that prominent. I couldn’t argue that it was poor, there is a sort of a live feel to it, but then again at times it sounded somewhat crude. There is a pure 80’s direction in the sound no doubt, which I admired as a fan, yet it could have been a bit better. ANGUISH FORCE presented themselves as an 80’s inspired Metal band, and the album’s sound pattern kept their word. Some would see is a mere cliché, yet every band has the right for its own identity, even if its sounds like a million times over examples.

Without a grand intro to celebrate the opening shrapnel, ANGUISH FORCE attacked right from the get go, piercing with what seemed their favorite Speed / Power Metal doctrine, reminding the late 90’s rise of European Power Metal and its strong stance. Strongly maintaining an impressive décor, “Mermaid” led me to one of the band’s best fusions between 80’s and 90’s, with an 80’s favor of course. Galloping in a classic manner that turned me back to NWOBHM, attributing British harmonic twin axes alongside simplified rhythm guitar riffing and nice soloing efforts, I found this effort quite fair. Val Shieldon’s vocals, now ex-vocalist of the band as recently announced, appeared quite solid in his singing; however, his accent was often his red flag. Although filled with reoccurring riffs, as it is hard to actually be original in this tradition when so many crossed paths with it, the instrumental tune “Tsunami”, tracking over 8 minutes, had me enticed as the band’s best effort. ANGUISH FORCE sped most of the way, modulating within the riffing from time to time; escaping boredom with a lead guitar harmony, which sometimes was swallowed in the mix, which has some interest. When turned its gaze towards mid tempo passages, it was once again a British nostalgia, 80’s IRON MAIDEN with plenty of other titles to go around. Over 8 minutes for this kind of track is just too much, I would have let go of the last several reprises of the last passage, clocking at least 2-3 minutes.

The epic project of “Elise Odyssey” was quite a challenge, and I guessed that it was even for the band. With almost half of the tune on the verge of galloping explosion, the band enchanted with a silky phase, emerging violin, channeling fuzzy bass that displayed several mistakes, talk about lack of assurance. Afterwards, ANGUISH FORCE buzzed with an volatile Power / Speed, and plunged with a MAIDEN outro to burn it out. I see it as quite an ambitious effort, a bit overly stretching the idea, but notable for its melodic flavors. The band fired several other solids like “Medusa”, “Army of Poseidon” and “Megalodon”, which seemed as if Rolf Kasparek of RUNNING WILD was making a guest appearance. Generally, these were the same thing altogether, simple songwriting, just for the sake of speed and pumping out energy.

I believe that these Italians had their share of experience, since it is also their sixth studio release. The band’s sense of nostalgia and keeping the old flame burning is more than recommendable. However, the band’s music in overall isn’t overwhelming, they could turn a few stones with several tracks, but surely nothing here is the ultimate champion. With Shieldon’s departure from the band, I hope that the new guy will show more promise to the band’s material. I suggest on keeping a close eye of what will be up next for these sea raiders.